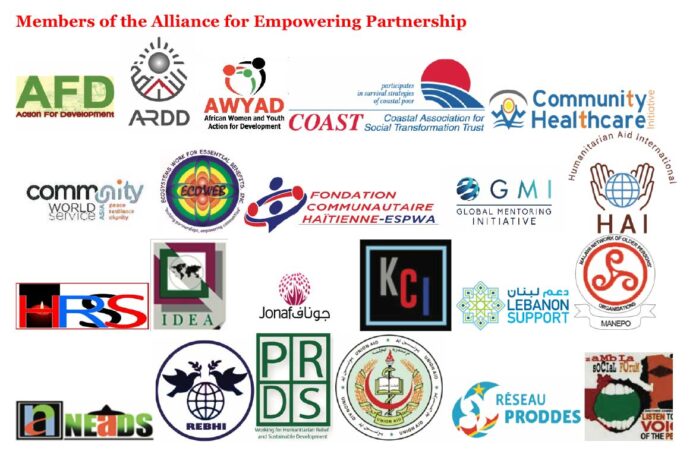 The May 2016 World Humanitarian Summit brought together 9,000 participants. They came from 180 Member States, included 55 Heads of State and Government, 700 NGOs and CSOs, of which 350 national and local ones, and 250 international ones, 350 representatives of the private sector, 130 representatives of the UN agencies, funds and programmes and other stakeholders including academia, faith-based leaders, and media. It was a culmination of an almost a two-years long multi-stakeholder process, costing millions of dollars.

Many more local and national CSOs took part in the regional consultations process, prior to the Summit. Globally, the largest number of organisations engaged in humanitarian action, development, peacebuilding, disaster risk reduction and climate change are national and local organisations. They engage on issues like gender-based violence, gender equity, education, protection, economic empowerment, climate change, poverty reduction, health education etc. As they mostly operate in their own societies, they obviously have a longer-term and ‘nexus’ perspective (unless and until international aid funding forces them into short-term project perspectives).

However, five years after the World Humanitarian Summit, with a firm commitment to include national and local actors “in a spirit of partnership” and irrespective of size and financial weight[1], they remain the most under-represented group in the humanitarian system, in decision making processes at local, national, regional, and international level.

There has been a much talk about inclusion and diversity in general. The Grand Bargain itself intends “to increase the range and diversity of partners willing to contribute”. Yet there is noticeable reluctance to open the space for meaningful inclusion and participation of local actors, including the affected populations. International agencies retain the power to decide who participates, how often and when. Their representation in the Inter Agency Standing Committee for example, is only through international NGO networks. The hierarchical system includes permanent members from UN agencies, standing invitees who are all selected from International agencies and networks and from the office of the Special Rapporteur on the Human Rights of Internally Displaced Persons. It has and continues to be a struggle to get more national and local CSOs present, on equal terms, into e.g. Humanitarian Country Teams or even the Grand Bargain Workstream on Localisation.

The most frequently used excuse is that there are so many local actors, and even national and local CSO networks, that international actors cannot choose who might be a legitimate representative. But international actors should not be deciding on behalf of local actors. This is patriarchal behaviour, very common in the past but not fit for the present or the future. Nor should a requirement to be a formal signatory of the Grand Bargain be an entry criterion. The international aid system impacts on large numbers of national and local CSOs around the world: as impacted stakeholders, they have an intrinsic right to a voice. Isn’t that what international agencies preach and promote in the societies they intervene in?

However, when they are allowed at multi-agency tables, for example also in advisory committees to country-level pooled funds, national/local CSOs discover that majority of the time they have little ability to really influence decision-making. Theirs remains “a voice in the wilderness and a lone voice”.[2] There are different reasons for this:

The Diagram visualises the status pyramid. In the international system.

This is not a product of imagination. Many who have experienced it and testified to it.[3] When this plays out in a context that experiences a strong internationalisation i.e. influx of and dominance of international agencies over strategic and operational decision-making, this too ‘shrinks the space’ for national and local CSOs.

The UN, overall, is not an ally: Increasingly, functions and authority are being passed to UN-led structures. While there is a role for the UN and UN agencies can add much value, they are too often driven by their own institutional (growth) interests, and/or the agendas of member states. They are not regularly acting as agencies ‘for and by’ the people, and systematic enablers of voluntary, people-driven initiatives.

Let us face up to it: The governance structures of the international relief sector are anything but inclusive, diverse, democratic. They encourage monoculture rather than biodiversity.

Coming in from the wilderness

As the new Grand Bargain 2.0 is being negotiated there is an opportunity to transform the inequity in the humanitarian aid structure[4].

International aid actors have committed to “reinforce rather than replace local and national capacities”. That cannot happen unless they are ready to take a step back where they dominate. At the same time, national and local actors need to step in and step up. They need to organise their internal processes to determine who, on their behalf, should join in these forums and platforms, and what is required of them. Such individuals need to come from independent, national or local, organisations that are not beholden, financially or otherwise, to international aid. And they need to gain and maintain the trust of a broad section of local and national actors. They should be in regular communication with multiple local and national actors, which is technologically very easy today. They need to inform about upcoming agendas and consult beforehand, and subsequently report back. As most national and local organisations do not get the quality financing that aid donors grant international agencies, their organisations may not be able to provide them with the time and practical support they may need to be able to do this. Broader network support, and even some international finance, may be needed here.

It is high time the international aid sector as a whole, and the relief sector in particular, becomes more inclusive, diverse and democratic. The credibility of the ‘new’ Grand Bargain depends on it.

[1] As the Grand Bargain puts it: “benefits are for all partners, not just the big organisations.” The Grand Bargain – A Shared Commitment to Better Serve People in Need, page 2-3, 2016.

[2] Quote from a national network leaders who are representing local CSOs in the HCT and country based pooled funds.

[4] A4EP statement – Future course for a Grander Bargain 2.0, Time to walk side by side, Increasing representation of local organizations in global discussions, page 4, March 2021