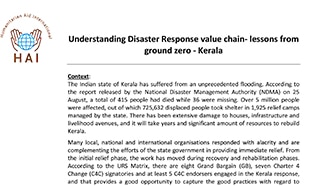 The Indian state of Kerala has suffered from an unprecedented flooding. According to
the report released by the National Disaster Management Authority (NDMA) on 25
August, a total of 415 people had died while 36 were missing. Over 5 million people
were affected, out of which 725,632 displaced people took shelter in 1,925 relief camps
managed by the state. There has been extensive damage to houses, infrastructure and
livelihood avenues, and it will take years and significant amount of resources to rebuild
Kerala.
Please download this from here.