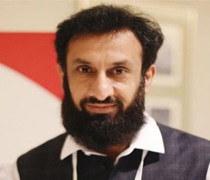 Mr. Muhammad Amad has master degree in political science from Peshawar University. He has started his professional career as lecturer in political science and then was selected as assistant collector by provincial government. He had been a volunteer social worker in community since graduation and initiated social reform organization with fellows in college. He switched to social sector during his PhD research and started his carrier as program manager and then selected as an executive director in IDEA organization in 2008, he was extended as ED for the second turn. He served in all emergencies (natural, conflict and complex) in KPK & FATA, Pakistan. He designed and implemented a number of projects to reach out needy and marginalized segment of the society. He contributed in the establishment of National Humanitarian Network (NHN) since its inception in 2010; NHN is a network of 172 humanitarian organizations across Pakistan. He was elected to serve as provincial chair for the period of 2011-15,then central executive member from 2015-2017 and finally elected as Chair of NHN in July 17. He is an advocate of localization of humanitarian action; he is in the advisory board of UN Humanitarian Pool fund in Pakistan, member of Humanitarian country team and a regular contributor to UN strategic policies and Plans. He is a member of realization team for START Hub in Pakistan. He contributed to the civil military protocols in complex emergency and part of Humanitarian Access Working Group. Further more, he is endorsee C4Cs and member of GNDR and PHAP

He is director on the board of Omar Asghar Khan Centre for Development (OAKCD) and designated by provincial government as member of senior citizen council in 2016. He represents national civil society at different national and international forums and in meetings with government, UN and donors.